We have five houses all named after Religious Orders (groups of Religious working together.)  When a child joins the school we place them in house group.  We try to ensure that all brothers and sisters are placed into the same house group.

We have a reward system which allocated House points to children for good work and behaviour.  The house points are totalled every Thursday and shown on the front page of the website. 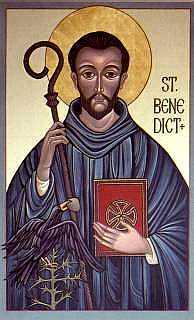 The life of St. Benedict is told rather simply, yet his example and writings are filled with wisdom for all ages, including the present.

Benedict was born in Nursia, Italy, around the year 480, and was the son of a noble family. As a youth, he went off to Rome to study. At that time, Rome was showing signs of moral and political decay. Turning away from such Corruption, Benedict discontinued his studies and withdrew from Rome and went into solitude.

For three years Benedict remained in solitude in a cave. Through a life of fasting and praycr, he sought to grow closer to God. Being such a holy person, the local people would seek him out. They desired that he pass on the message of Christ to them during a time in history that was greatly in need of the Gospel.

In the year 529, after having lived these years as a monk, Benedict established a monastic foundation where men, who wanted to live a life in common and together seek out the Lord, could come to dwell. This new "school of the Lord" came to rest on a hill near Cassino in Italy. Hence, the monastery came to be known as Monte Cassino. There, Benedict established his community and wrote a rule, that is, a guide to be followed in the daily lives of his monks. Benedict guided the community as the father, also known as the abbot, until his death around the year 547.

Since this humble beginning of the Benedictine monks, that is, those vowing to live their lives under the Rule of St Benedict, the religious order has spread throughout the world down to the present day. From Monte Casino many other Benedictine communities have been established.

You can find out more about the Bendictine monks in the UK today here. 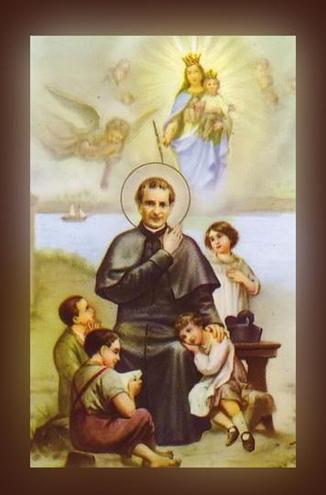 John Bosco was born in Turin, Italy. His parents were poor farmers. His father died when John was only two years old. John and his brothers helped their mother work on the farm as she struggled to keep the family together. As soon as he was old enough, John, too, worked as hard as he could to help his mother.

He was intelligent and full of life. By the age of nine, John wanted to become a priest and his mother let him go to school. John used to wake up early in the morning to do his chores before he left for school. Finally, a holy priest, St. Joseph Cafasso, found out about John's wish to be a priest. Father Cafasso helped him enter the seminary.

He learned to do all kinds of trades. He was a carpenter, a shoemaker, a cook, a pastry maker and a farmer. He did many other jobs as well. He didn't realize how much this knowledge would help others later.

John would go to circuses, fairs and carnivals, practice the tricks he saw magicians perform, and then present one-boy shows. After his performance, while he still had an audience of boys, he would repeat the sermon he had heard in church that day. John became a priest in 1841.

As a priest, Don Bosco, which means Father Bosco, began his great ministry. This kind priest felt sad when he saw so many children living on the streets of Italy. Like a loving father, he gathered together these homeless boys and taught them trades. This way they would not have to steal or get into trouble.

Many rich people gave him money to help build workshops. He later started a printing press so he could print books and leaflets to teach people about God's love for them and how to be good Christians.

By 1850, there were 150 boys living at his home for boys. Don Bosco's mother was the housekeeper. He loved these children, however naughty they were, and the boys loved him because John Bosco always encouraged them.

"Do you want to be Don Bosco's friend?" he would ask each new boy who came to him. "You do?" he would ask happily. "Then, you must help me save your soul," he would say.

Every night he asked his boys to say three Hail Mary's, so that the Blessed Mother would help them keep away from sin. He also helped them receive the sacraments of Reconciliation and Holy Communion often and with love.

Every morning he would say Mass for his students giving them beautiful sermons and telling them interesting stories. He asked the young boys to imitate Jesus in everything they did - whether it was work, study or play and told them that God wanted everyone to be saints as He had a great reward waiting for them.

One of the boys listening very carefully was young Dominic Savio who told John Bosco that he would try very had to become a saint and please God. And he did.

Don Bosco started his own religious order of priests and brothers. They were called the Salesians, after St. Francis de Sales. Then he started the order of Salesian sisters with the help of St. Mary Mazzarello. These men and women pray and teach young people about God's love in countries all over the world even today.

Don Bosco died on January 31, 1888. All the people of Turin came out on the streets to honor him. His funeral became a joyous proclamation of thanksgiving to God for the life of this wonderful man.

You can find out more about the Salesians in the UK here. 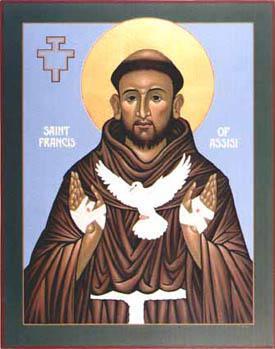 St. Francis was born around 1181 in Assisi, in Italy. As a young man he loved parties and good times. He was handsome and rich, so he bought himself the finest clothes and spent money freely. Francis had no wish to study or to learn his father's business, as he was having too much fun. One day he refused to give alms to a poor beggar but as the man was leaving, he felt sorry for what he had done and ran after him with some money.

After he fell ill twice, Francis realized that he was wasting precious time. He realized that he should be serving Jesus and began praying more and making sacrifices to grow strong in spirit.

While riding his horse one day he saw a leper and quickly turned his horse to ride away. Then he thought to himself, if Jesus saw a leper he would not turn the other way. So he kissed the horrible-looking leper, and gave him money.

Often he gave his clothes and money to the poor. He served the sick in hospitals. Still he felt he must do more. He fasted and began to go around in rags to humble himself. It is not hard to imagine how his rich friends must have looked at him now! His father was so angry that he beat him and locked him up at home. Francis bore all this suffering for love of Jesus.

When his father took everything from him in disgust, Francis put all his trust in his Father in heaven. He said that he was married to "Lady Poverty" and he began to live as a beggar. He had no shelter. His food was what kind people gave him. Everywhere he went, he begged people to stop sinning and return to God. Many men began to see how close to God this poor man really was, and they became his followers. Francis followed the example of Jesus closely by living a life of simplicity and teaching the Gospel message with great joy.

That is how the great Franciscan order of priests and brothers began. They helped the poor and sick and preached everywhere. Even after the order had spread all over Italy, Francis insisted that they should not own anything. He wanted his priests to love poverty as he did. St. Francis had the power of working miracles. He loved all creatures and the birds and animals happily obeyed his commands!

As a reward for his great love, Jesus gave him his own wounds. Two in his hands, two in his feet and one in his side but the humble Francis tried to hide them from people.

Toward the end of his life, he became very sick. He was told he would live only a few more weeks and he exclaimed, "Welcome, Sister Death!" He asked to be laid on the ground and covered with an old habit. He advised his brothers to love God, to love being poor, and to obey the Gospel. "I have done my part," he said. "May Jesus teach you to do yours." Francis died on October 3, 1226.

You can find out more about the Franciscans in the UK here. 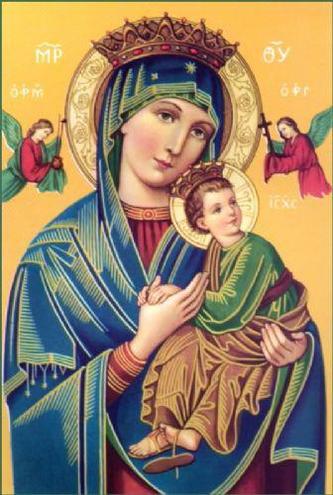 The Notre Dame teaching order are named after Jesus' mother, Mary, known in the Catholic Chuch as Our Lady.  We all know about how Mary gave birth to Jesus, the long journey to Bethlehem, the stable, the visit of the shepherds and the Magi.  We can read how she is with Jesus when he was found in the temple at the age of twelve.  We later hear of how she suported Jesus on the day that he was crucified, as he walked with the cross towards his death at Golgotha.

The Sisters of Notre Dame provide Catholic education throughout the world. 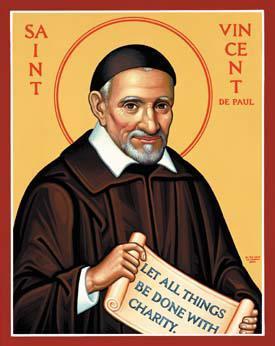 Vincent, was born in a town in Southwest France and was the son of poor French peasants. Today the town is called Saint-Vincent-de-Paul, Landes, France.

When he grew up and became famous, he loved to tell people how he had taken care of his father's pigs. Because he was intelligent, his father sent him to school to study under the Franciscan friars at Acqs. And after finishing his studies from the University of Toulouse, Vincent became a priest at the age of 20.

At first, he was given an important position as the teacher of rich children, and he lived rather comfortably. But while he was traveling by sea from one city to another, he fell into the hands of Turkish pirates who sold him as a slave in Tunis.

Two years later after he was finally set free by one of his owners, who he converted to Christianity, he returned to France where he served as a parish priest.

Then one day, he was called to the side of a dying peasant. In front of many people, this man declared that all his past confessions had been bad ones.

Suddenly Father Vincent realized how badly the poor people of France needed spiritual help. When he began to preach to them, crowds went to confession. He finally decided to start a congregation of priests to work especially among the poor.

The charities of St. Vincent de Paul were so many that it seems impossible for one person to have begun so much.

He took care of criminals who worked on the sailing ships and he opened hospitals and homes for orphans and old people.  He collected large sums of money for poor areas and  sent missionaries to many countries

Even though he was such a charitable man, however, he humbly admitted that he was not so by nature. "I would have been hard, rough and ill-tempered," he said "were it not for God's grace."

"It is not sufficient for me to love God if I do not love my neighbor. I belong to God and to the poor." Vincent de Paul died in Paris on September 27, 1660.

You can find out more about the Vincentians in the UK and Ireland here. 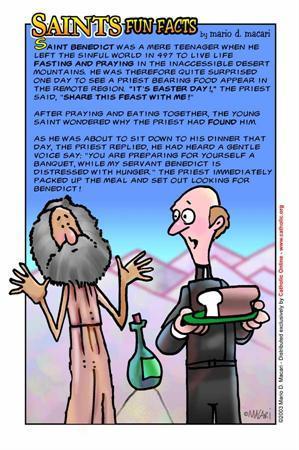