Menu
Please remember to advise the school if you or any member of your household tests positive for Covid 19. Thank you.
A Log In Log in

History of the School 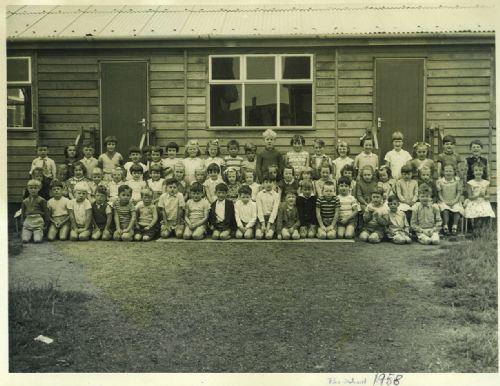 Our Lady Queen of Heaven School First School was built in 1957 as Crawley New Town was taking shape and opened on 11th September 1957.  The school, part of Crawley Parish,  started in temporary accomodation, as can be seen on the left, while the main school building was constructed.  It opened with 36 children of 5 and 6 years of age in 2 huts, as can be seen on the left.

The first two teachers were both nuns, Sister Marie and Sister Marie-Odile.  Just one year later the school had grown to 105 children and a new "Infant Department" building was created.

By 1960 the school had grown to 200 pupils and the additional junior classrooms were complete, enabling Our Lady's to be a full First School.

By September 1961 there were 9 classes and 325 pupils on roll.   (You can read more about the history of the parish here.)

Over time the school has grown with major new additions to the building in 1995 when the school changed to a primary school for children aged 5-11 and 2003-12 when new facilities were added.  In 2015, building works began to expand the school from a PAN of 45 pupils, to 60 pupils.

We celebrated our 60th Anniversary (Diamond Jubilee) in 2017 when we welcomed many past pupils, teachers, Governors back to the school.

Do you have any old school photos or memories you would like to share.  If so please email info@olqoh.com with details.  Photos and documents shared will be added to our archives; contributions are much appreciated.